The rest of the day was the height of what I would call excellent fishing. The way the stories from the past on the PM go. Lots of hot fish, super active, a conveyor belt of fresh fish moving into the holes — one after another. Fresh feisty fish, jumping, hooking up everywhere. Doubles hooked up. Lines broken, fish flying, boils everywhere. Laughter carrying down the river. Nets in the wter, fish flopping, hooks poking, tangling in the net. Pure insanity, all day. That’s what makes salmon fishing fun, the common bond forged over supporting others with net duties, trading swings through the holes. Hanging out on the banks watching your friends hook up and break off. Sun shining through the golden tipped leaves of early fall. 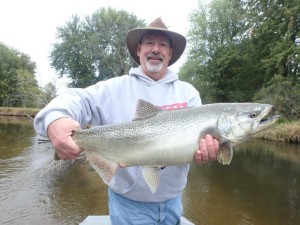 A few more fish are starting to show up, and while most of the fish are between twelve and seventeen pounds, Joe Blankenship, while fishing with Crockett, put our largest King of the season to the net, weighing in at 26 pounds. (Pete is pictured above). While some of our pools don’t have the numbers of fish per pool, we’re bouncing around hitting several spots and making a day. Crockett has been running skein and floats and doing justice on the river. I’ve been following suit on some days and it’s nice to put more than one or two fish to the net. All of our guides have their little niche on the river that has been working for them and everyday we’ve been putting our guys into fish and lately it’s been getting better. With cooler temperatures and the water up a little from the rain a few days ago, more fish are entering the river daily. October could be our month of Kings this year. 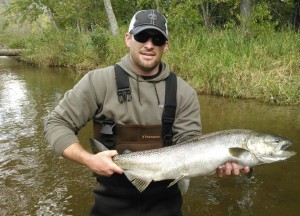 It has been a tough weekend.  This past Friday was one of our toughest days for every one of our boats.  While just about all of us put a fish or two to the net, our numbers were way down and we had boats scattered from the “Green Cottage” to Scottville and just about every stretch in between.  Today was a little better for some of us as a few fresh fish showed up and some were chrome, like the hen that Josh (pictured above) from MO caught with me today.  While we had a push of fish, it was a small push.  Word is out that Peré Marquette Lake is still running a water temperature of 65 degrees, a potential wall of warm water that is keeping most fish gated out.  A lot of Kings are being caught and marked on sonar just outside the break walls of Ludington and another large school of Kings hanging 6 miles south of Ludington, MI.  My gut feeling is that we’ll get our fish, and when we do they will be coming in like a bad storm.  In the mean time, we appreciate what we get.  If we continue to get small pushes like we got today, on a regular basis, it will be a good precursor of what’s to come. 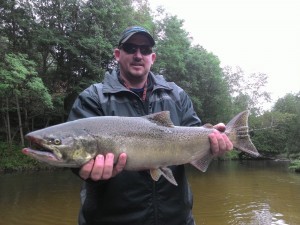 The salmon bite has been good with most people reporting a few fish caught for a days fishing. Better yet the fishing pressure, so far anyway, has been light.

Steve found a couple fish in most holes while fishing the middle of the PM. Throwing spinners they were able to get into a couple nice salmon and one steelhead.

The first part of this week has been cool and wet, so hopefully more salmon will be on the way.

Every time Paul Jakubiak and I get together to fish, it’s cold, icy, ice in the guides and 20 degrees. Not this time! I knew we had a small window, a little rain, a little spike in water depth, which meant we should be able to do a little steelhead fishing and put a fish or two in the net. And with the nice weather, Paul even enticed his wife Cathy (both pictured above) to come along and enjoy the ride, and see the madness that we all talk about when it comes to steelhead fishing. Paul, Cathy and I go way back some 25 years ago, when the two of them managed Barothy Lodge, and while I’ve seen Paul over the years, it was great to see Cathy again. They both run a little sport shop in Battle Creek, MI called “Smitty’s” and with in they have upgraded the fly fishing department and of course Paul’s “Uncle Jakes” in which he is into vintage fly rods, vintage blanks, rod building, and fly tying. His web site is unclejakes.net
The three us motored down the river checking out our ‘regular’ hot spots. Some were empty, some had single and pairs, and then we came up to a very nervous group of 5 steelhead on a redd. It didn’t take but a few casts, and these fish soon scattered and would duck and dodge our offerings. We went back to where we had seen fish earlier and they were holding pretty. We were hooking up but they were giving us the slip until Paul landed a nice skipper, then a four pounder, and they kept getting bigger. With in an hour’s time, Paul had put four steelhead to the net consecutively before they started getting nervous on us, but by then we didn’t care, the day had been made. We fought some good fish; we lost our share, and got some nice pics; the best part, no ice in the guides and no frigid weather. Great times with great long time friends, it doesn’t get better than that!

“When I met Chris Martin and Dan Holland from the Beverly Hills, MI area, at the launch on the Peré Marquette River, Dan let me know that he had never landed a Steelhead in Michigan.  I was up to the task, the river was ripe and in perfect condition with plenty of Steelhead running up river with the high water.  At first glance, there was no doubt the river had come down and cleared up since it crested yesterday.  These guys were ardent fly fisherman, so we armed our selves with floating lines and indicator rigs and the first run we fished gave us the tone of the day as we hooked three nice Steelhead.  The first two came unbuttoned at the end of Dan’s line and Chris’s fish snapped the 8 pound tippet.  With lessons learned, we moved to the second run and Dan’s first Michigan Steelhead came to hand.  Dan didn’t stop there as we worked our way down the river, as his second, then third, fourth, etc. came to the net and by days end he put seven nice steelhead to the net as his Montana nymphing techniques shined over the cloudy, windy day.   As we were making lunch, Chris was working the lower end of a pool and soon his fly line was searing down river as his fish was working toward submerged timber.  After a few quick moves with his 11’ “switch” rod, the chrome Steelhead was brought into the open water and it wasn’t long there after and another nice Steelhead was at hand.  It was another great day on the river as the boys put eight Steelhead to the net despite the 30 mph wind gusts that prevailed.

The Peré Marquette River is looking perfect as the dirtier water of yesterday has turned to a nice tea color and it’s dropping quickly.  I would have to imagine that the lower river will be in shape toward the middle of week, just in time for a few “casts and blasts” we have scheduled for this week.  November is such a great month and goes way too quickly.  Get outside and enjoy it, no matter the weather, there is just way too much going on in the great outdoors to miss it as winter’s snows are just around the corner.“
Tight Lines!  David Roller
Pere Marquette Outfitters